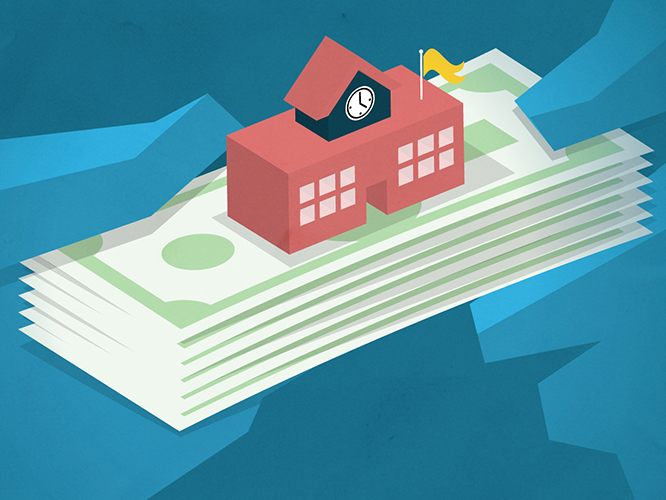 Indiana allocates the majority of state K-12 education funding (86%) via the state tuition support funding formula, or state tuition support. Prior to 2009, the tuition support formula was funded through a combination of state and local tax dollars. Since 2009, it has been funded only with state tax dollars. The tuition support formula calculates state tuition support for traditional public schools, public charter schools (including virtual charter schools), and Choice Scholarships. Dollars received by schools from the tuition support formula are generally used to pay for operating expenses, such as salaries for teachers and staff, administrative costs, supplies, and utilities. On average, school corporations receive about 41% of all property taxes collected statewide. Property tax revenues are used by schools to pay for the cost of transporting students to and from school (including the purchase of school buses), capital expenditures (including facility upgrades, repairs, and technology equipment), and various types of debt service (mortgages, bonds, leases, and certain pension debt). Traditional public school corporations also have the ability to ask their taxpayers to pay more in property taxes to increase education funding through a capital project referendum, an operating levy referendum, and, effective July 1, 2019, a school safety levy referendum. Successful referenda are exempt from the constitutional property tax caps; however, they do expire and must be reauthorized.

A round-up of all the districts that will put a tax increase on the ballot in November, including a couple of school districts with both construction and operational referendums.

The importance of school facilities in improving student outcomes

A large body of research over the past century has consistently found that school facilities impact teaching and learning in profound ways. While improving facilities comes at a financial cost, the benefits of such investments often surpass the initial fiscal costs.

Athletic Facilities An extension of our classrooms